Food ~ The First Fuel of Industry

Built on a steep mountain grade in the late 1800's, "The Richest Hill on Earth" was intended to be a powerful place from the very beginning. With wide streets, tall buildings, and sweeping mountain views, Butte is a city that once mattered very much; and the hope of re-capturing that stature continues to nourish its dreams.

The city's notorious mining history, though, often overshadows recognition for the broad cultural diversity of its immigrant residents, and at the heart of those cultures was food. Indeed, Butte's reputation for fine dining and authentic ethnic cuisine endured long after the mining operations were in decline.

Now in its tenth printing, The Butte Heritage Cookbook is a cherished record of culinary life in the Mining City; and it underscores the value of promoting, maintaining and enriching Butte's legacy of artisan food production and fusion. 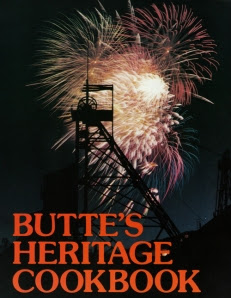 In 1885, Butte was booming with a population of 22,000, largely foreign-born, the majority of whom were Cornish and Irish immigrants (miners) who had found their way into the camp. Around the turn of the century, when vast migrations of people from Europe seeking freedom and a better life arrived in this country, Butte received its share of newcomers. The population swelled to 47,635, with an estimated 50% listed as foreign-born. Also, by then a number of settlers had come west to rebuild their lives and fortunes after the Civil War.


In 1918, when the town reached its peak population, some authorities (unofficially) estimated the number of people in Butte and the surrounding area to be 100,000. At one time there were as many as 50 nationalities represented in Butte's population. No matter what the differences in racial origin, religion and custom, there has always existed a bond of hospitality among Butte cooks; and no matter from whence they came, they brought something from which we have borrowed to enrich our present-day tables.

Brillat-Savarin, an 18th century gourmet observed, "The pleasures of the table are of all times and all ages, of every country and of every day." This is a town where the Cornish pasty and Serbian povetica share equal billing; where on St. Patrick's Day corned beef, washed down with green beer, is devoured with as much gusto by the Finns, the Cornish, and the Serbs, as by the Irish; where out-of-town visitors dining at Butte's famous Italian restaurants marvel at a side dish called sweet potato salad inherited from an early-day French restaurant proprietor; where an Italian immigrant family made famous a Spanish tamale; and an Italian miner willingly swapped as share of his bucket of "dago red" for a generous portion of Cousin Jack's oversized pasty.

Collectors of Butte nostalgia discover how closely the story of food is woven into the fabric of the community. In the single man's era of Butte, hundreds of boarding houses dotted the hillside. Restaurants and saloons, breweries and bakeries were an important facet of the town's colorful business community. The Cornish pasty was adopted by all as the miner's main lunch-bucket meal. Teddy Taparish, from Dalmatia, received world-wide acclaim with his famous Italian Rocky Mountain Cafe. In the days of the Copper Kings, the Silver Bow Club wined and dined the most prominent of the nation's financial world.

Posted by Cynthia Gaffney at 10:32 AM